Strasbourg definitely deserved at least one whole day of exploration. After another amazing Alsatian breakfast, we hopped on a tram and headed downtown. 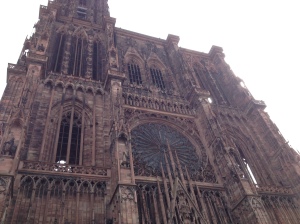 We had a coffee on a café terrace just in front of the cathedral, giving us ample time to take in the full splendor of its intricate facade. 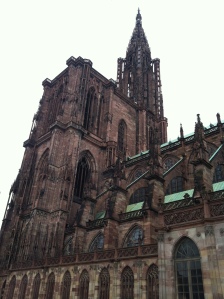 And the side view…

After we felt we had gawked at the cathedral’s exterior long enough, we decided to actually go inside. The interior was just as incredible as the exterior. 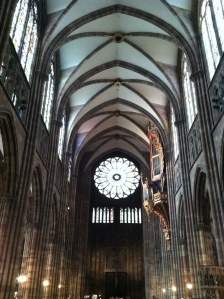 Mozart once played a concert on the organ, which seemed to hover between the delicately fluted columns like an enormous gilt bird’s nest.

You can see why the Reformers accused the Catholics of being over-the-top.

The Strasbourg cathedral is famous for its astronomical clock, which dates from the 14th century. Besides being very old and very intricate, its other claim to fame is its animated Procession of the Apostles. For two euros, we stood and waited with a crowd of tourists just like ourselves, mostly adults, speaking many languages, all with sore feet from standing around on the concrete for half an hour, waiting for a clock to chime.

At 12:30, the crowd fell silent, and every face turned upwards and expectant toward the clock as it began to chime, and we all became childlike with wonder. The crowd was almost as magical to watch as the clock.

An ancient wooden rooster at the very top crowed and beat its wings three times as the Apostles began to proceed in front of the Angel of Death. The figures’ legs moved with astonishing articulation, considering their clockwork dates from the 1800s. Two cherubs rang two little bells, and it was done. The crowd filtered back out into the cathedral or into the hazy sunlight.

For once, we stuck to our plan of having a light lunch: a salad without two pounds of cheese and sausage on it, and spaetzle with wild mushrooms. Jazz musicians busked on the corner, perhaps in town for the festival that would start the coming week. 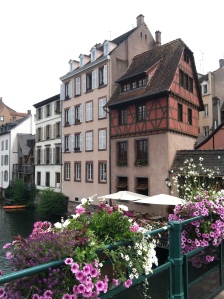 Petite-France seen from the “covered bridges.”

We strolled along the canal to what are known as the Covered Bridges, really the remains of 14th-century ramparts that have since lost their roofs (apparently a lot was going on here in the 14th century). Flowers trailed over the railings, reflecting the fanciful colors of the half-timbered homes that led right down to the canal, many with kayaks or rowboats tethered to their front steps. 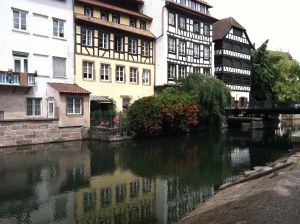 The cute factor was strong with this town.

We spent the afternoon being proper tourists for a change: browsing the boutiques, buying ice cream, having an afternoon drink on a café terrace. I even bought some postcards. 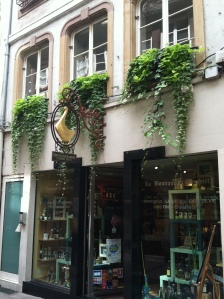 A whole shop devoted to foie gras, which we somehow did not actually go into.

By late afternoon, it had grown oppressively hot and humid, so we did the only logical thing: find a bar with cool drinks (to hope for air conditioning would be asking for too much). The bartender even thoughtfully put ice in my glass of water without me asking, a rare and kind touch in Europe.

Not long after we ensconced ourselves in a booth, groups began to filter in and inquire about reservations. Turns out that the World Cup quarterfinals (I think that’s what it was, anyway) were about to begin. We sat quietly and observed as the barman turned away group after group wanting to sit in the booths next to ours because their view would be blocked once a large group was seated at the high table in front of the TV. We were happy to have a spot at all, and as the bar filled up, we just sat in the windowsill to see over the crowd.

An excellent view of the game.

As if on cue, a huge clap of thunder burst just as the game was about to begin. A pounding thunderstorm followed, but was not enough to drive away the crowds forming outside to watch through the window. The national spirit was strong enough to get even a confirmed non-sports-follower like yours truly cheering along. The atmosphere was especially intense since France was playing Germany, and we were at the very epicenter of the French-German rivalry.

France lost, badly, but the people of Strasbourg were gallant about it, and no cars were burned or even overturned.

Drew was on a mission to try one last traditional Alsatian meal, coq au Riesling. In this local twist on coq au vin, chicken is slowly braised in Riesling wine instead of in red Bourgogne. We were lucky enough to get a table at one of the most famous restaurants in Strasbourg, la Maison des Tanneurs.

This restaurant is housed in a historic building hovering over the canals at the entrance to the picturesque Petite-France quarter. It may have looked like a tourist trap, but the food, wine list, and service were all sublime. 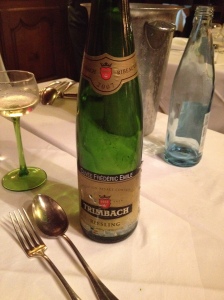 Since it just so happened to be the house specialty, we both ordered the coq au Riesling with spaetzle. The meat was just as tender as in the coq au vin we had in Bourgogne, but the Riesling sauce was even more delicate and creamy.

It was a good thing we had a light lunch. Once again, we ate everything.

The proprietor met us at the door and asked how our experience was. There was only one word for it: extraordinary.

The next day, we were headed for Paris. To us, Strasbourg was just as fascinating as the City of Light, perhaps even more so since it was new to us and so completely different from the rest of France.

There was only one place to go when we did get to Paris: over the top.

And oh, did we ever.

I will tell you all about it tomorrow!

5 thoughts on “A Full Day in Strasbourg”

Cooking with a Wallflower
Petaluma Unwound

Horse humor and the musings of a weenie adult eventer

Purpose, Perspective, and Perseverance for thriving in a challenging world

Inspiring Food for an Inspired Life!

Picnic at the Cathedral

Cultural travel on a budget

Once the bug bites, it won't stop

A plateful of travel insights. Occasionally served with crème fraîche.

Travels and Tomes: One Expat's Amblings and Ramblings

About travel, food, family, and the quirks of living abroad in Germany, England, and Turkey.

Sharing my love for travel, photography and food

Walk and Bike in France and Europe www.walk-bike-camino.com

Editor and writer. Interested in tiny things, unhealthy nostalgia, old jungle mixtapes, my little homestead, and my cats. Not to be fed after midnight.

When I grow up I wanna be a tourist

life is a work in progress